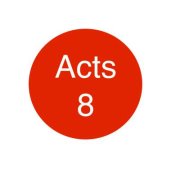 On of the most exciting and hopeful aspects of the Episcopal Church’s 77th General Convention was the Acts 8 Moment.Â  The initiative takes its name from the chapter in Acts of the Apostles when the church faced a great persecution and scattered out of Jerusalem.Â  The result was the spread of the good news to new people and places with great joy.Â  Three Episcopal bloggers, Scott Gunn, Susan Snook and Tom Ferguson, hatched the Acts 8 Moment idea after reading each others’ writings and thinking about how to move the church forward.Â  Two meetings at convention gathered dozens of people for prayer, Bible study, dreaming and discussion.Â  A video of most of the powerful completions of the end of the sentence, “I dream of a church that…” can be found here.

At the end of the second meeting, some time was spent brainstorming how to move forward.Â  Susan Snook has summarized that discussion in her blog, also posted here at the Acts 8 Moment website. Putting together the website (thank you Frank Logue!) was a big first step.Â  In the interests of continued brainstorming, I’d suggest the following as a framework for thinking about next steps for the Acts 8 Moment.

Hearing our discussions and thinking about what this group of people could add at this time, I would suggest three broad goals for our work:

Some specific actions to accomplish those goals could include:
1. Building a community

There are probably many other good ideas for helpful activities.Â  I hope these three areas will provide a useful focus for our conversations as discern together how we can best serve God, God’s Church, and God’s people.